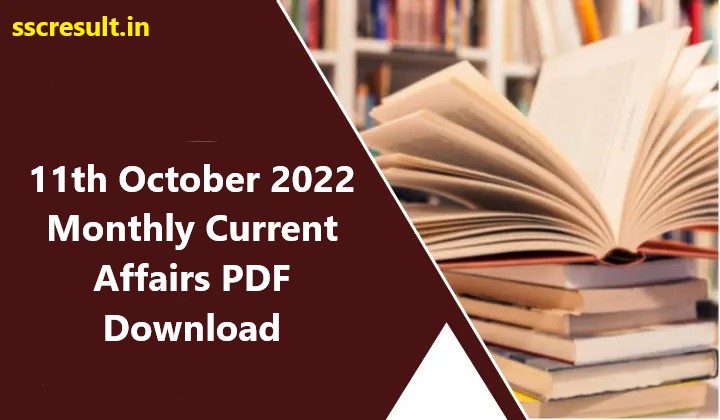 Daily GK updates are incorporated with the important news that made the current affairs headlines for banking or other competitive exams. Daily GK Update is the complete bag of important news that is held all day long. One should have complete knowledge about banking terms, current affairs news, etc. So, here is the GK update for 11th October 2022 to help you prepare the Current affairs part. After reading this section, you can successfully attempt Current Affairs Quiz.

2. Pakistan To Take Part In The SCO Anti-Terror Exercise Hosted By India

Important takeaways for all competitive exams:

6. Association of Mutual Funds in India: A Balasubramanian re-elected as Chairman

Important Takeaways For All Competitive Exams:

Important Takeaways for All Competitive Exams:

Important takeaways for all competitive exams:

Important Takeaways For All Competitive Exams:

19. International Day of the Girl Child observed on 11th October

Q2. The Central Government has appointed who among the following as the Presiding Officer of the Unlawful Activities (Prevention) Tribunal which will review the ban imposed on the Popular Front of India (PFI) and its affiliated organisations?(a) Justice Dinesh Kumar Sharma(b) Justice Satish Chandra Sharma(c) Justice Siddharth Mridul(d) Justice V. Kameswar Rao(e) Justice Yashwant Varma

Q6. World Migratory Bird Day has been commemorated twice a year. This year, it was previously celebrated on 14 May and for the second time, the world marks this day again, ______.(a) 5 October(b) 6 October(c) 7 October(d) 8 October(e) 9 October

Q7. What is the theme of World Cotton Day 2022?(a) Cotton: The Fibre that Moves Me(b) Cotton is renewable and bio-degradable(c) Cotton for Good(d) Weaving a better future for cotton(e) NEW-LOOK COTTON

Q8. HDFC Life has launched the ‘Insure India’ campaign that is aimed at educating Indians on the benefits of life insurance as a product category. HDFC life is a joint venture between HDFC Bank and which of the following?(a) Morgan Stanley(b) JPMorgan Chase(c) Abrdn mauritius holdings 2006(d) BlackRock(e) State Street Global Advisors

Q9. Who among the following has been appointed as CEO of Bank of India Mutual Funds?(a) Rajendra Gupta(b) Vipin Joshi(c) Mohit Bhatia(d) Soni Thakur(e) Jaspreet Kaur

Q10. What is the theme of World Cerebral Palsy Day 2022?(a) Promotes inclusion​​ One of the big goals(b) Navigating crises(c) Secure Future(d) Millions of Reasons(e) Goble Sign

S2. Ans.(a)Sol. The Central Government has appointed Delhi High Court judge Justice Dinesh Kumar Sharma as the Presiding Officer of the Unlawful Activities (Prevention) Tribunal which will review the ban imposed on the Popular Front of India (PFI) and its affiliated organisations.

S3. Ans.(a)Sol. The World Bank slashed its growth estimate for India by one percentage point to 6.5 per cent for FY23, citing the blowback of the Russia-Ukraine war and ongoing global monetary policy tightening.

S4. Ans.(c)Sol. The Norwegian Nobel Committee declared Belarusian activist Ales Bialiatski, Russian human rights organisation Memorial, and the Ukrainian NGO Center for Civil Liberties (CLL) as the winners of the 2022 Nobel Peace Prize. The three of them have been awarded for “outstanding effort to document war crimes, human rights abuses, and abuse of power”.

S5. Ans.(b)Sol. Indian Air Force was raised on October 8, 1932, and it is completing 90 years today. The day and its observance is a matter of pride for Indians and inspire a patriotic zeal among the citizenry for the air arm of the Indian Armed Forces.

S7. Ans.(d)Sol. The theme for 2022’s celebration of World Cotton Day appears to be “Weaving a better future for cotton,” as apparent from the posters released by the Food and Agriculture Organisation of the United Nations (FAO).

S8. Ans.(c)Sol. HDFC Life, one of India’s leading life insurers has launched the ‘Insure India’ campaign that is aimed at educating Indians on the benefits of life insurance as a product category. The objective of this campaign is to educate Indians about life insurance thereby motivating them to secure their future with this unique financial product that offers benefits.

S9. Ans.(c)Sol. Bank of India Mutual Fund (BoI MF) has appointed Mohit Bhatia as the new CEO. Mohit has over 26 years of experience in the financial services industry largely in the mutual fund business.

S10. Ans.(d)Sol. The Theme for World Cerebral Palsy Day 2022 is “Millions of Reasons”. This year’s them highlights that there are 17 million people all over the world who are suffering from the cerebral palsy disorder.