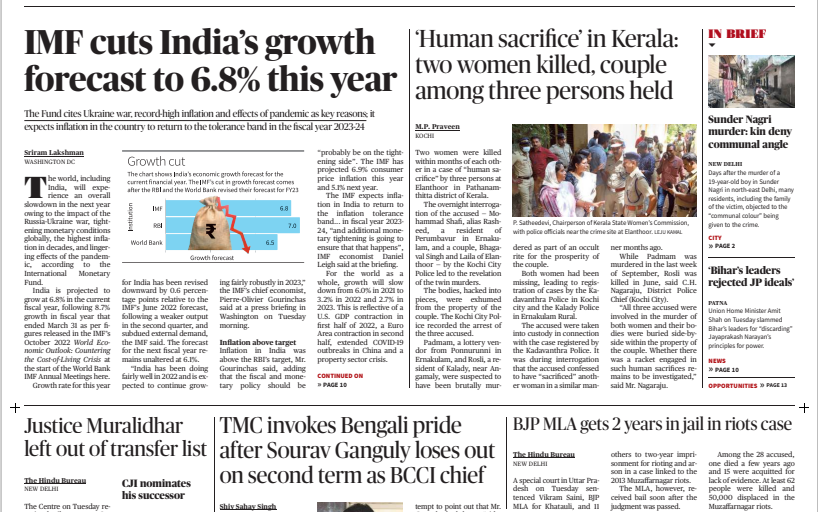 With the help of a daily wordlist from the Hindu newspaper of 11st October, 2022 our aim is to help you completely understand the commonly used words with their meanings, pronunciations, synonyms, antonyms, and proper use in sentences, etc. Today’s Hindu newspaper contains important vocabulary words like grim, intermediary etc. which can be downloaded from the monthly PDF of The Hindu Editorial Vocabulary to strengthen your preparation.

Q. Who among the following is honored with 28th Bihari Puraskar?

Q. AGRO Vision is being organized in which city of Maharashtra?

Q. Which country among the following hosted The Water Technology and Environment Control conference?

Q. Shaukat Kaifi was known to be the popular actress of which cinema?

Q. In which city is the headquarters of NALCO located?

Q. Where is the headquarters of International Finance Corporation (IFC) situated?

Q. When did IFC (International Finance Corporation) came into existence?

Q. What was the GDP growth rate of India in the July-September 2019 quarter?

Q. Hormones are not present in

Q. Which of the following dances belong to Meghalaya?

Q. Who established the Nanda dynasty?

Q. How many types of nerves are presented in the human body?

(d) None of These

Q. Who is the first Chairman of ISRO?

(c) All of the Above

(d) None of These

Q. Which first female officer is going to be posted abroad as ‘Naval Attache’ by Navy?

Q. Which among the following was the first artificial satellite?

Q. Who is known as the father of ‘‘HUMAN GEOGRAPHY’’?

(d) none of these

Q. When did Lata Mangeshkar receive the Padma Bhushan?

(d) none of these

Q. Which of mythology characters had a blessing that he could neither be killed during the day nor during the night?

Q. Which of these leaders used to be the chief minister of his or her state for four consecutive terms?

Q. Island Palace is located in which city?

Q. What among the following is the unit of frequency?