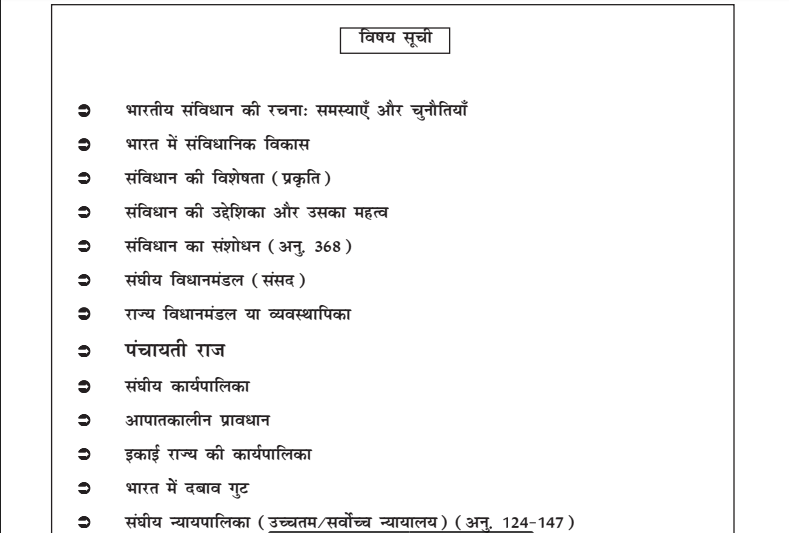 Polity Book PDF for All Competitive Exams in Hindi

Polity Book PDF for All Competitive Exams in Hindi

Polity Notes in Hindi: Hello my dear friends, This post is all about Indian Polity Book PDF Free Download for upsc pdf of ncert notes for upsc will help you to boost your score in SSC Exams. However, This Indian Polity and Constitution Book PDF is very important to Crack SSC CGL, CHSL (10+2) and CPO Sub Inspector (SI) Exams. Also this NCERT Indian Polity Book in PDF will be helpful for SSC Junior Engineer (JE), Stenographer and SSC JHT.

1. Before the independence of India, Dadra and nagar haveli were under the administrative control of ?A. EnglishB. FrenchC. PortugueseD. Afgans

2. Who among the following was the first chief Justice of India and assumed office on 26th Jan. 1950 ?A. Meher Chand mahajanB. Patanjali sastriC. Harilal KaniaD. BK Mukherjea

3. Which Constitutional Article lays down the provision for a National Commission for SC and ST ?(A) Article 337(B) Article 334(C) Article 338(D) Article 339

5. National Commission for SC and ST shall be made by which constitutional institution ?(A) Parliament(B) Executive(C) Judiciary(D) State Legislature

6. Under Constitutional Article 343, which is the official language of the Union ?(A) Urdu(B) Hindi(C) English(D) b & c

9. The Constitution of India, was drafted and enacted in which language ?(A) Hindi(B) English(C) Tamil(D) Telugu

13. The Constitution declares India to be a sovereign, socialist, secular, democratic republic, assuring its citizens of justice, equality, and liberty, and endeavours to promote fraternity among them. The words “socialist” and “secular” were added to the definition in year:A. 1956B. 1976C. 1970D. 1952

18. For the members of parliament in India, who determines the salaries and allowances from time to time ?A. Union cabinetB. Ministry of Parliament AffairsC. Cabinet secretariatD. Parliament by law

19. Who was the prime Minister of India when a Constitutional status for the Panchayati raj and urban self- governing institutions was accorded ?A. Indira GandhiB. Rajeev GandhiC. PV Rarasimha RaoD. Atal Bihari Vaipayee

20. In India when both Offices of President and Vice-President happen to be vacant simultaneously who will discharge the duties of the President ?A. Prime MinisterB. Union Home MinisterC. Speaker of Lok sabhaD. Chief Justice of India

21. As per constitution of India, the Legislative assembly of a state consists of more than 500 and not less than 60 members, but which one of the following states has 32 Members ?A. DelhiB. SikkimC. GoaD. Puducherry

22.In the union govt the council of Ministers is collectively responsible to the:A. Prime Minister of InidaB. Lok sabhaC. Lok sabha and Rajya SabhaD. Union cabinet

23. Under whose direct supervision is the Lok sabha secretariat ?A. Cabinet SecretaryB. Ministry of Parliament affairsC. Speaker of Lok sabhaD. Prime Minister of India

26. Who is the chairmen of National Integration Council ?A. President of IndiaB. Prime Minister of IndiaC. Minister of Minority affairD. Chief Justice of India

27. Which one of the following dealt with the subject of Local self Government ?A. Balwant rai Mehta CommitteeB. Kothari CommissionC. Veerappa Moily CommitteeD. Venkatachalam Commission

28. Which one of the following is not a fundamental right ?A. Right against exploitationB. Right to constitution remediesC. Right to propertyD. Cultural and educational rights

29. Which one is known as Lower House ?A. Lok SabhaB. Rajya sabhaC. Vidhan SabhaD. Vidhan Parishad

33. The administrative and operational control of the Armed Forces is exercised by the(a) Cabinet Committee on Political Affairs with Prime Minister as the Chairman(b) Ministry of Defence(c) Three Chiefs of the Army, Navy and Air Force Staff(d) President

35. Who among the following is directly responsible to Parliament for all matters concerning the Defence Services of India ?(a) President(b) Prime Minister(c) Defence Minister(d) Cabinet Committee on Political Affairs

36. How many times the President of India can seek re-election to his post ?(a) Once(b) 3 times(c) 2 times(d) Any number of times

37. Who among the following has the power to form a new state within the Union of India ?(a) Speaker of Lok Sabha(b) President(c) Prime Minister(d) Supreme Court

38. Is the Prime Minister bound to advise the President on matters on which his advice is sought?(a) If the Council of Ministers so desires.(b) Yes(c) No(d) It is discretionary

39. When the Vice President officiates as President he draws the salary of(a) Chairman of Rajya Sabha(b) Both (A) and ( C )(c) President(d) Member of Parliament

40. Who among the following can attend meetings of the Union Cabinet ?(a) President(b) Cabinet Ministers(c) Ministers of State(d) Deputy Ministers

41. Who among the following has the Constitutional authority to make rules and regulations fixing the number of members of the UPSC(a) Vice- President(b) President(c) Home Ministry(d) Cabinet Secretary

42. Under whose advice the President of India declares Emergency under Article 352 ?(a) Chief Ministers of all states(b) Prime Minister(c) Cabinet(d) Council of Ministers

43. Who acts as the President of India when neither the President nor the Vice President is available ?(a) Seniormost Governor of a State(b) Chief Justice of India(c) Speaker of Lok Sabha(d) Auditor General of India

46. The President can proclaim emergency on the written advice of the(a) Speaker of Lok Sabha(b) Prime Minister(c) Chief Justice of India(d) Union Cabinet

1. The executive power of the Union is vested in which one of the below?

2. Which one of the following article deals with the pardoning power of the President?

3. The impeachment of the President is carried by which one of the following?

B. Members of the legislative

4. Which one of the following article deals with the tenure of the President?

5. Which of the following article deals with the impeachment of the President?